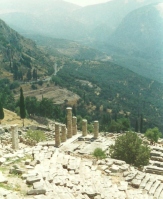 Years ago I visited Delphi, the navel of the world, the prehistoric site in mainland Greece where ancient people worshipped mother earth or Gaia and later Apollo, whose instructions they heard from the Oracle through the priestess Pythia. Apollo was God of the sun, but also thought to be in charge of truth, light, and poetry, among other things, and leader of the muses.

The bus ride from Athens was long and hot, and the scenery a dull grey-green sea of olive trees and brush, except for the scatterings of stunning bright red poppies. The road took us through the town of Delphi and we stopped for lunch before going on to the site. I remember being surprised that people actually lived there, bought groceries and hardware so close to such a sacred place. I was glad they did though because of the spaghetti. For lunch we had spaghetti pan-fried in olive oil. All these years later my mouth waters when I think of it.

The museum was fascinating and the temple ruins breathtaking, but for me, Delphi will always bring to mind poetry and priestesses, poppies and pan fried spaghetti. Thank you Gaia.

Writer
View all posts by kconstantine →
This entry was posted in Uncategorized and tagged Greece, mythology, poetry, travel. Bookmark the permalink.
Loading Comments...
%d bloggers like this: